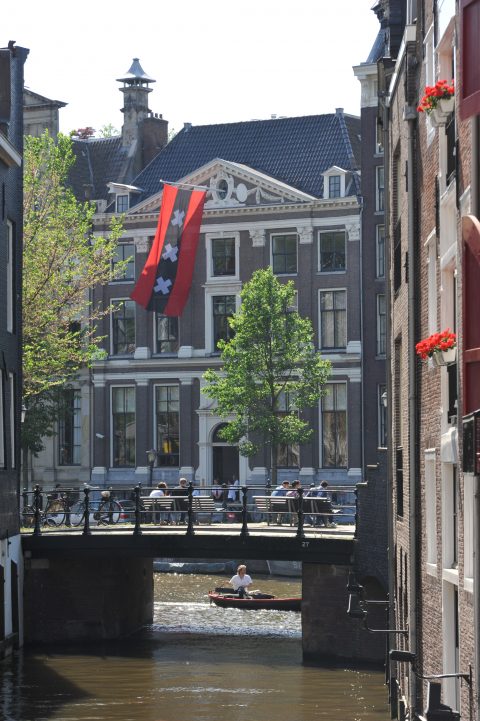 Sale of the canal house herengracht 386

This canal mansion was built in the 17th century by Philips Vingboons, Amsterdam's most important architect during the Golden Age. Auctioning the canal mansion as a piece of art has drawn worldwide publicity. In the years following the auction the ‘city palace’ was turned into a museum on the history of the canals. In 2012 Museum Het Grachtenhuis opened its doors for the public.

Philips Vingboons came from a family of painters, engravers and cartographers. It is most likely that he began his career as a painter, and he may have been a draughtsman for Jacob van Campen, the architect of the Royal Palace on the Dam and of Noordeinde Palace in The Hague. The 'halsgevel' or 'Vingboons-gevel' (neck gable), for example, is named after him because the oldest specimen of this elegant type of gable was designed by the architect of Herengracht 386. Vingboons documented his own work in his famous Afbeeldsels der Voornaemste Gebouwen [...] (1648), which also contains his design for the new Amsterdam town hall that was never brought to fruition.

The rich history of Herengracht 386 has borne witness to crucial moments in the development of several great nations and projects. One of the bankers established in the building, Jan Willink, supported John Adams by financing the American War of Independence. John Adams later became the president of the United States of America. An exhibition on finance on Wall Street last year showed that Dutch money and entrepreneurship paved the way for the foundation of New York.

Jurriaan Andriessen (1742-1819). One of the most impressive rooms in the building is the 'Andriessen room'. Jurriaan Andriessen was a popular painter of wallpapers in the 18th century. Most of his work was carried out for canalside properties in Amsterdam. For Herengracht 386 he produced seven 'built-in' canvasses. These paintings date from 1776 and belong to one of his best works. It is the only example of his specialty in situ, which means it is still kept in the place where it was designed. All seven paintings depict separate scenes and represent a combination of Dutch scenes and southern landscapes. On either side of the entrance to the large hall the paintings show a country road winding through a hillside terrain featuring a mule driver and 'off-duty' horseman relaxing in a tavern garden. The three canvasses on the long wall portray various views of a wooded area, a road with a number of travellers, and a romantic ruin with a modest farmhouse. The mantelpiece is flanked by two typical Dutch water scenes.